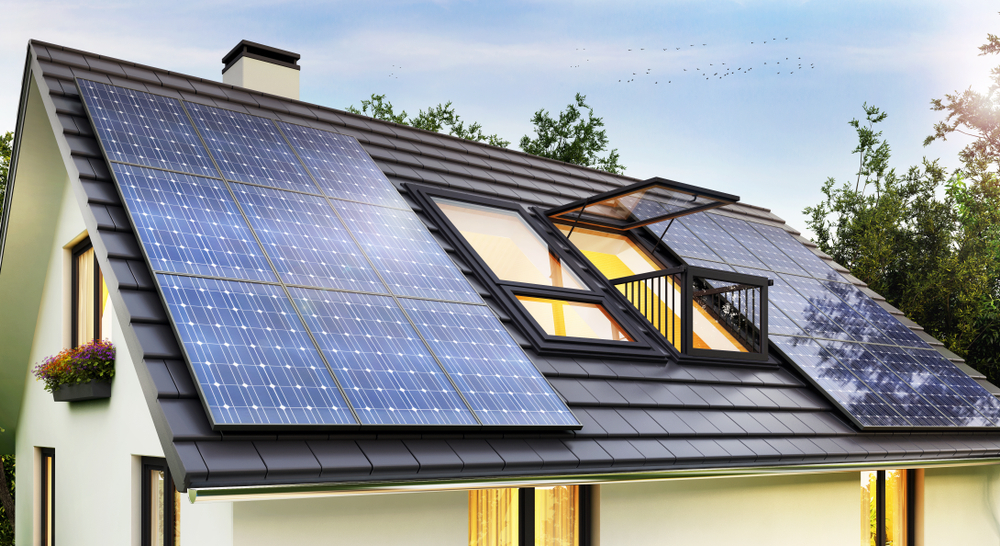 The UK is on a mission to meet a net zero target by 2050 by decarbonising all sectors of the economy.

One of the simplest ways homeowners can reduce their carbon footprint (or at least improve the energy efficiency of their property) is to install a solar PV system.

Installing solar panels on a roof – or elsewhere on a property if you’ve got the space – can help reduce your reliance on energy from the national grid.

And it provides several other benefits in the short and long-term, both in terms of energy efficiency and carbon reduction, but also financially.

In this quick guide we’ll run through the main reasons you should install a solar PV system at home.

The most obvious benefit of installing solar panels is that you can generate your own electricity as your panels are exposed to sunlight.

For example, south facing roofs produce better results from solar panels because they’re exposed to the Sun for longer periods. East and West facing roofs can also produce significant amounts of energy but are less efficient than South facing systems.

If you have a North facing roof, a solar PV system might not be efficient enough to be worth installing.

According to OVO energy, the average UK home uses around 3,731 kWh per year, while an optimally installed solar PV system can produce around 3,000 kWh of energy per year.

The recent energy price cap rise in the UK left households facing energy bill increases up to 54% in April this year (the equivalent of £700 for ‘typical’ energy consumption).

This, plus a general increase in the cost of living has left household budgets stretched to the limit.

However, if your home is producing and using its own electricity with solar panels, then you’ll be using less energy supplied by the national grid, and you could see your energy bills dropping as a result.

In fact, according to The Energy Saving Trust, solar panels could reduce the average electricity bill by between 15-25% a year.

As well as saving money on energy bills, installing a solar PV system provides the chance for you to make money by selling some of your excess electricity back to the grid.

Until 2019 this was known as the feed-in tariff. This was replaced in January 2020 by the smart export guarantee (SEG) scheme.

Under the scheme, energy suppliers will pay homeowners a fee for selling small amounts of excess electricity back into the grid.

However, unlike the feed-in tariff (which provided clear guidelines on the payment rates customers could expect) the SEG scheme does allow energy suppliers more power on the rates they pay.

Energy produced by solar panels is 100% renewable that doesn’t release carbon dioxide or other harmful by-products into the atmosphere, which means your home will instantly reduce its carbon footprint by using a solar PV system.

The overall reduction of your carbon footprint will depend on the system you have installed but, on average, a typical solar PV system could reduce a home’s carbon dioxide production by about one and a half tonnes per year.

That’s not always practical – or even possible – if your solar panels are producing energy during the day while you’re at work. During these times you’re not really getting the full benefits.

Installing a battery storage system alongside your solar panels means you can save and store solar energy produced during the day, then use it later even when you’re solar panels aren’t drawing energy.

There’s no question that having solar panels on your property can increase its potential value.

There’s no comparable increase in property value based on the cost of the solar PV system you install (for example a £2,000 PV system won’t necessarily increase your house price by £2,000)

However, because your home will be more energy efficient (with a higher EPC rating), will have the potential for lower energy bills and even the possibility of making money from excess energy, it could increase your property’s value in the eyes of potential buyers.

From cost savings on energy bills, to reductions in your home’s carbon footprint, to financial incentives there are a range of benefits that come with installing a solar PV system at your home.

If you’re interested in seeing the benefits from installing polar panels at home, get in touch.

We’ve got a full team of qualified and registered engineers who can help you through the entire installation process.

From designing and choosing the right PV system to install on your property through to the final installation we can help every step of the way to get your solar PV system installed quickly and professionally so you can start to see the benefits.